♫ Walking ’round a winter wonderland…

Being this close to Christmas, we’re sure you’ve already got the holidays sorted. But guess what? There’s next year to start considering. And the best time to start planning is now while everyone is distracted.

So, you’re dreaming about escaping the heat? Can’t stand the harsh infamous Australian summer? Well, why not a winter escape! There are many ideas snowing around our heads, and we’ve narrowed them down to five. Wake up on Christmas morning to snow-laden scenery; a winter wonderland if you will. Open up those pressies beside a crackling fireplace. Doesn’t that sound like a magical Christmas? Europe itself is a magical place during Christmas time. We’ve got four European countries on this list, starting with the vibrant city of Prague in the Czech Republic. It is imperative to visit the Old Town Square Christmas Markets during the jolly season; it’s by far the most Christmassy thing you can do. Think sparkling decorations, sprawling Christmas lights, festive stallholders and a massive tree to top it all off. It’s also a great way to find those last-minute gifts you’ve forgotten about or to start that list from scratch. But, the city offers more than markets. There’s unique food to try and plenty of hot chocolates to warm those loins. The city itself is also a spectacular place to explore, seeing from above in the Old Town Tower or strolling along the Vltava river – They are both as magical during the day as they are during twilight hours. Where better to celebrate a white Christmas than in the grandest city of them all, New York, New York? So good they named it twice! First things first: shopping. It would be unwise to come to New York and not check out the best shopping in the world along 5th Avenue. Soak up all the brand names and the fancy window displays during the winter season. And then there are the Christmas decorations that light up the city. Most notably the Rockefeller Center Christmas tree that overlooks the New York City ice rink. What better way to spend a December evening than swirling around a frozen man-made lake while lapping up a grandly designed Christmas tree? And then there’s the Bryant Park Winter Village featuring an array of stalls, rides and activities to welcome in the jolly season. Make sure to stick around for the new year welcome that goes off with a bang at Times Square. 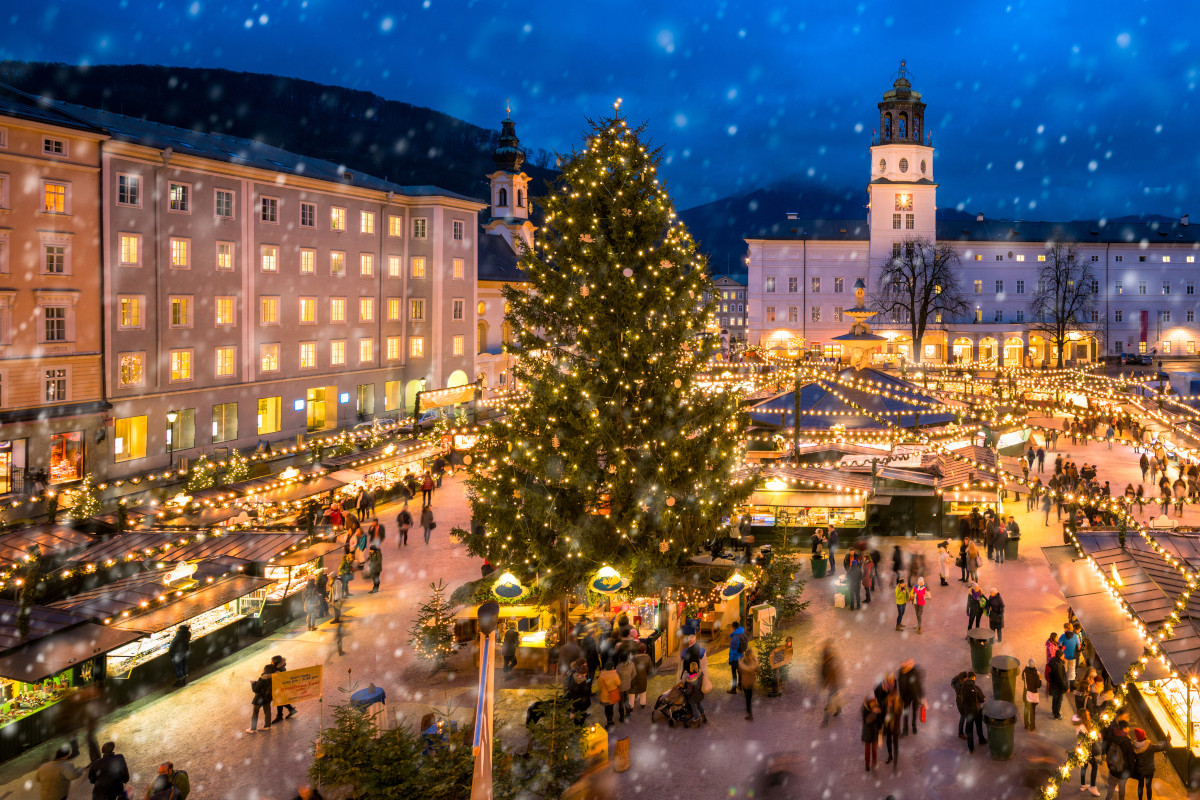 Oh Europe, how we love you… Especially during Christmas! And the next magical place to visit during the end of the year is at Salzburg, Austria. If you love your markets, this is the place to be with an array of bazaars that go off around the city. The most notable is the Salzburg Christmas Market featured above. Wander through the stalls and soak up the winter season that surrounds the front of Hohensalzburg fortress. And then there’s the Advent Magic in Hellbrunn, showcasing plenty of stores and even sleigh rides by real reindeer. While you’re in the city, be sure to visit a Mozart concert, since this is where the famous composer was born. Salzburg is a magical city during the holiday season, worth browsing around and taking in the local fair. For much-needed warmth, try a hot chocolate at Cafe Tomaselli. Russia is a big country, and believe it or not these guys love celebrating Christmas. However, they do it differently to the rest of the world. Most importantly, they celebrate Christmas on January 7 which is in line with the Russian Orthodox Church. If you’re looking for a special winter getaway for the Christmas holidays, consider dropping by Moscow. The city comes alive with dazzling fairs, free performances and even ice skating at either Red Square or VDNKh. It’s thanks to the ‘Journey to Christmas’ festival where Moscow beams like a spotlight. Catch a free performance at the Bolshoi Theatre, go snowboarding by the Kremlin and wander around Red Square for a spectacular fair. And in the midst of it all, join in the greatest New Years Eve party in Russia at central Tverskaya Street. Also, be sure to taste the local food. Of course, we cannot skip Germany when it comes to Christmas. And while Berlin might sound like the safe option, a better place to visit during the holidays is Cologne. The most notable attraction is the Christmas Markets held under the spires of Cologne Cathedral. The square out front is called the Roncalliplatz and it becomes dressed up in fairy lights, bustling stalls and a gigantic Christmas Tree smack bang in the middle. And they’re not the only markets on offer. You can find more around the city here. The city also comes alive with an ice rink near the Roncalliplatz. While you’re in town, treat your sweet tooth to a tour of Cologne’s Chocolate Museum. This factory is owned by Lindt, so you know it’s going to be good. You’ll be spoilt for choice here, just like all our other choices on this list.