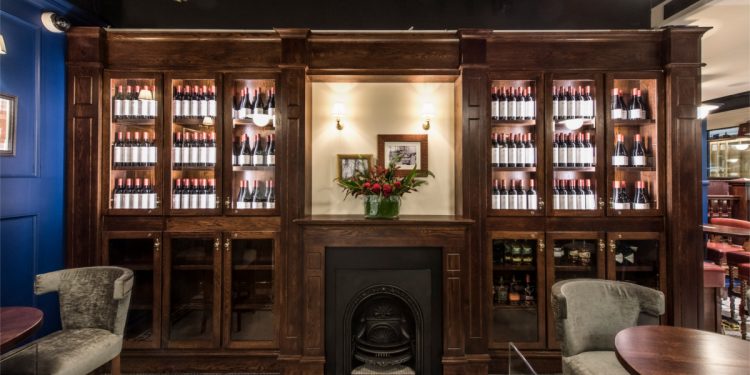 Paying homage to his father and business mentor, Patrick Gallagher has affectionately named his latest and perhaps most impressive establishment – a New York-style bar and grill – Mr. G’s.

After just one year in Sydney’s culinary scene, we can safely say that the original Mr G (or Mr Gallagher) has once again cemented his larger-than-life attitude and hotelier background through the Gallagher Hotel Management and the InterContinental’s youthful New York-style bar and grill.

Hidden on the ground floor of Double Bay’s lavish InterContinental Hotel, Mr. G’s impresses diners, drinkers and passerby’s alike. Heavy wooden panels, leather and velvet lounges, intimate booths, split-level dining spaces and wisps of early-century decor mirror the chic of a bar hidden deep within the heart of New York in the 1930’s. Rock and roll of the 1950’s, aged wall hangings and glassware reminiscent of the Mad Men era will make any diner feel transported as they step across Mr. G’s grand threshold. After winning the prestigious title of Best New Restaurant at R&CA Awards for Excellence in 2017, we had to see what all the fuss was about. We visited Mr. G’s on a doubly important day: their very first birthday and International Whiskey Day. Met with champagne cocktails infused with mint and classic old fashioned cocktails with Buffalo Trace’s Kentucky-born whiskey, Mr. G’s sophistication was unmistakeable.

Mr. G’s prides itself on it’s heart-warming menu and endless whiskey concoctions. Just browsing through the bar and grill’s menu, American influences jump out at you: upon their 180g eye fillet, 280g flat iron, 500g rib eye cutlet and 750g t-bone you will have no shortage of decadent sauces or sides – in fact, they’ll offer you extra sauce. With homemade chimichurri, mushroom, béarnaise, armagnac pepper or jus alongside their award-winning meats, Mr. G’s will make it difficult for you to find a better tasting cut of beef in Sydney.

Pairing perfectly with their cuts is an endless list of American, Scottish, Irish, Australian and Japanese whiskeys as well as Guatemalan and Dominican rums, international gins, cognacs and agave.

Although Mr. G does well to express their owner’s Irish heritage through their offerings of Irish and Scottish whiskeys and hearty meat-centric dishes, it is their sophisticated decor, generous dishes and classic Western cocktails that thrust an American influence across Mr. G’s classically-adorned confines. Being treated to a cross-section of Mr. G’s old-school menu throughout the night, we began our tastings with the famous Gallagher oysters – oysters paired with refreshing tones of cucumber and lemongrass sorbet. Following closely was fish tacos with ginger, black sesame, ponzu and wasabi fish roe and eggplant tacos. As the night progressed, we were generously given Mr. G’s champion dishes: buttermilk hot chicken wings and Little Joe eye fillet with creamed corn which was decadently followed by a classic New York cheesecake with graham cracker dust.

Executive chef Ronny Ghantous and Angela and Patrick Gallagher’s abode in the heart of Double Bay is an establishment demanding of attention far longer than a New York minute. A diverse bar and grill that is a fresh and colourful addition to the InterContinental’s round-up of first floor businesses, it is the perfect spot for a family get-together, romantic date or quiet drinks amidst the elegance of Double Bay.