10 of the Best Cities to Visit in Portugal 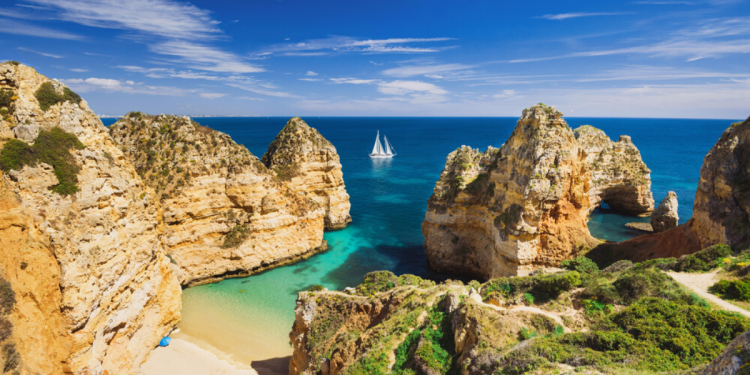 From Porto through to Lisbon, Portugal is your newest travel destination waiting to be explored.

Home to Cristiano Ronaldo, charcoal chicken, port wine, Portuguese custard tarts, some of the most laidback and friendly people you’ll ever meet and, not to forget, one of the world’s largest supplier of, can you guess it, cork. But, behind all of this, there’s much more to Portugal that’s just waiting to be explored.

Think, a rugged, breathtaking coastline that directly overlooks the Atlantic Ocean, a luscious inland filled with farming villages and magical fresh springs and, of course, the countless castles, palaces and a rich medieval history that’s scattered throughout.

Spain’s neighbour, although Portugal is large at heart, the country is in fact quite small, running just 561 kilometres in length from north to south. In comparison, Australia is 84 times the size of this European delight. So whether you’re visiting for a few days or an extensive trip, regardless, Portugal has plenty to offer and will surely become your newest favourite European escape. So pack your bags and your camera as we’ll be guiding you through the 10 best cities to visit in Portugal.

When is the best time to visit Portugal?

Renowned for its spectacular coastline and inland delights, pending on your itinerary and preference, the best time to visit Portugal is from March to May to enjoy the spring. Or, to take advantage of the pristine beaches and lively locals, we also recommend visiting from June through to mid-August.

In the heart of Portugal, Coimbra is a preserved medieval riverfront city. Formerly Portugal’s medieval capital, today, Coimbra is a vibrant city encapsulating a euphoric mix of old meets new. With the Mondego River streaming through the city’s heart, here visitors will be able to view hundreds of rabelo boats transporting everything from locals to wine. The perfect hub for expanding your travels, we recommend hiring a car for your trip in Coimbra and setting out on a day trip to the slate-made town of Serra da Lousã – a lush district which blossoms in Portugal’s fall. A further 20-minute drive will lead you to Serpins – a farmland town where in summer, the natural springs and rivers such as the Rio Ceira explode with locals trying to escape the heat. Otherwise, 45-minutes north in the town of Águeda, throughout July each year, the streets are adorned with thousands of umbrellas for the renowned Umbrella Sky Project. Situated on the tip of Portugal’s southern coast, Lagos is a haven for coastline enthusiasts. Found tucked along the strand of the Algarve, Lagos is the meeting point for all southern travels. So what can you expect? Think of it as the epicentre of some of Portugal’s best Atlantic beaches, jaw-dropping cliffs, fresh seafood, welcoming locals and so much more. Found a touch away from Spain’s border, for your visit to Lagos you cannot pass an opportunity to visit Sagres, Praia da Luz and Portimão – all beautifully charismatic and distinct in their own way. Regardless of where you visit on this beach-to-coastal-town hopping adventure, you’ll soon find a flair for the Algarve and the beauty that it provides.

Welcome to Portugal’s capital, Lisbon. Found on Portugal’s south-east coastline, Lisbon (or commonly known as Lisboa), sits perched along the bank of the renowned Tagus River. Adorned with pastel-coloured ornate architecture, Lisbon is home to some of the world’s most notable sites including Game of Thrones featured Belém Tower as well as the Padrão dos Descobrimentos monument. After you’ve enjoyed the highlights of Lisbon amidst the working trams and one of our favourite rooftop bars in the world, a short drive west will take travellers to Cascais – Portugal’s summertime playground or a blissful mix of southern Italy meets Malta. With a population of just over 267,000, this tiny south-westerly island sits off the coast of both Portugal and Morocco. An archipelago of four islands, Madeira is renowned for its warm climate, volcanic-like terrain and lush greenery. Featuring pebbly beaches, Madeira is a bewitching escape reminiscent of a magical garden throughout. Although your trip will likely comprise of lazing on the beach or hiking through the intricate terrain, adrenaline seekers will soon fall in love with Madeira’s capital, Funchal, and the toboggan ride through the streets of Monte. Strapped into a two-seater woven basket, sled-pushers will weave you through the streets of Madeira of up to speeds of 18-kilometres. For a more relaxed activity you can instead wander through the Madeira Botanical Garden – a blossoming escape.

If you’ve ever wanted to experience an entire intact medieval town, look no further than Portugal’s Óbidos. Less than a 30-minute drive from Peniche, Óbidos Castle is one of the country’s best preserved medieval towns. Featuring a functioning fortress wall which visitors can walk along, Óbidos Castle is also home to a main square, hotels, restaurants, shops and more. The town itself is home to 3100 locals and come mid-July to August, Óbidos Castle transforms into a medieval festival complete with jousting, wizards, stalls and much more. Regardless of when you visit, Óbidos Castle is free to visit year-round. Whilst you’re inside, be sure to try Ginja (Portuguese ginja berry liqueur) chocolate cup shots. But be warned, they are extremely addictive! Welcome to Olhão or by its official name, Olhão da Restauração. This little town sits on the most southern point of Portugal and is commonly known for its laid-back, fishing village community and the twin markets, Mercado de Olhão that sell everything from fresh seafood, fruit, vegetables, knick knacks and a delicious range of Portuguese sweets. For your visit to Olhão, we recommend catching the ferry to one of the neighbouring islands to enjoy the pristine beaches. Our favourite is Culatra Beach. Otherwise, a short drive will take you to the Ria Formosa Natural Park, Faro which is Olhão’s neighbouring city and Albufeira – home to one of the Algarve’s most cherished beaches, Praia da Falésia, and SandCity FIESA – the world’s largest sand sculpture theme park – all just over an hour’s drive west out of Olhão. Portugal is known for its rugged coastline and what better way to experience its captivating seaside attractions than by visiting Peniche. Found just over an hour north from Lisbon, the best way to enjoy Peniche is by the water at one of the many beaches – most of which are circled by breathtaking cliffs, fairytale-like caves and walkways to viewing points which look like small castles. Whilst you’re in Peniche, wander your way to Baleal to view the intense rocky cliffs or the Cabo Carvoeriro Lighthouse. Next, head to Fortaleza de Peniche (Peniche Fortress) which features remains of the former Atouguia da Baleia castle from 1558. For hikers, Peniche will soon become your haven with an eight-kilometre circuit available to experience Peniche’s distinct headland. Otherwise, for a more relaxing option, head to The Base to enjoy a delectable range of delights at this cocktail tapas bar. This is the north’s delight. Renowned for its port wine production, Porto is split by the winding Douro River which is the home to most of Porto’s treasures amidst the narrow cobbled streets. If you’re stuck on what to visit, Porto is home to Sydney Harbour Bridge’s smaller cousin, the Luis Bridge. Spend your evenings in Porto lounging by the riverbank to enjoy the sunset. Or, to appreciate Portuguese art, visit one of the best bookstores in the world and then make your way to the São Bento train station that’s embellished with thousands of bewitching azulejo tiles – much like most of the city. For a small day trip, an hour’s drive south out of Porto will have you exploring Aveiro and later Costa Nova Beach – home to the iconic striped beach houses. Described as a palette of colours washed around town, after one visit, you will agree that Sintra is a life-like fairy tale. Easiest to visit from Lisbon, this coastline town sits at the base of the Pintra Mountains and, much like all of Portugal, is adorned with magnificent structures, charming gardens and of course, castles that make you wish that you were royalty. Perfect for a two-day visit, Sintra is vivid with brightly coloured manors especially the most notable, mountain-peak-residing National Palace of Pena. If you’ve had an overload of castles but you’d like to still remain outdoors, then Quinta da Regaleira Gardens is a must. Covered in lush, meticulous greenery, here visitors will find an array of gardens, caves and more waiting to be explored.