Gay Christmas is upon us in another vibrant year of fun and frivolity.

This weekend, 188 floats will shimmy their way along Sydney’s iconic gay strip, Oxford Street, wowing hundreds of thousands of spectators and millions across the globe. But there are a few special ones to look out for this Mardi Gras parade.

We’ve trundled through the long list, picking out the floats that are marvellous in their own way; whether emotionally, with quirkiness or just plain fun. They are in order of appearance, with the number corresponding to their position in the parade.

We've come so far, and we know there's so much further to go together. Join us for #MardiGras2020, with the theme focussing our communities on WHAT MATTERS.Browse all the events happening 14 Feb – 1 Mar here on our website: https://www.mardigras.org.au/

The theme for Mardi Gras 2020 is “What Matters”, and the organisers are bringing forth their own colourful spin on their chosen theme. It will be a pertinent protest on the world we live in, exploring the current political and social atmosphere with a creative flair. It will be a climactic explosion of love and hope. According to the organisers, “What Matters is knowing we are all connected on this earth and we must take care of our only home.”

A lot of businesses jump onto the LGBTQI bandwagon for Mardi Gras and usually jump off when it’s all over. But, ANZ stays aboard all year round, promoting acceptance and tolerance in an ongoing spiel while getting extra fabulous for Gay Christmas. This year, ANZ has launched their campaign slogan “Spreading #LoveSpeech”, with the aim of disarming hurtful language – one comment at a time. According to ANZ, “our float encompasses our message of #LoveSpeech, our rainbow community and the magical fierceness of the unicorn…” 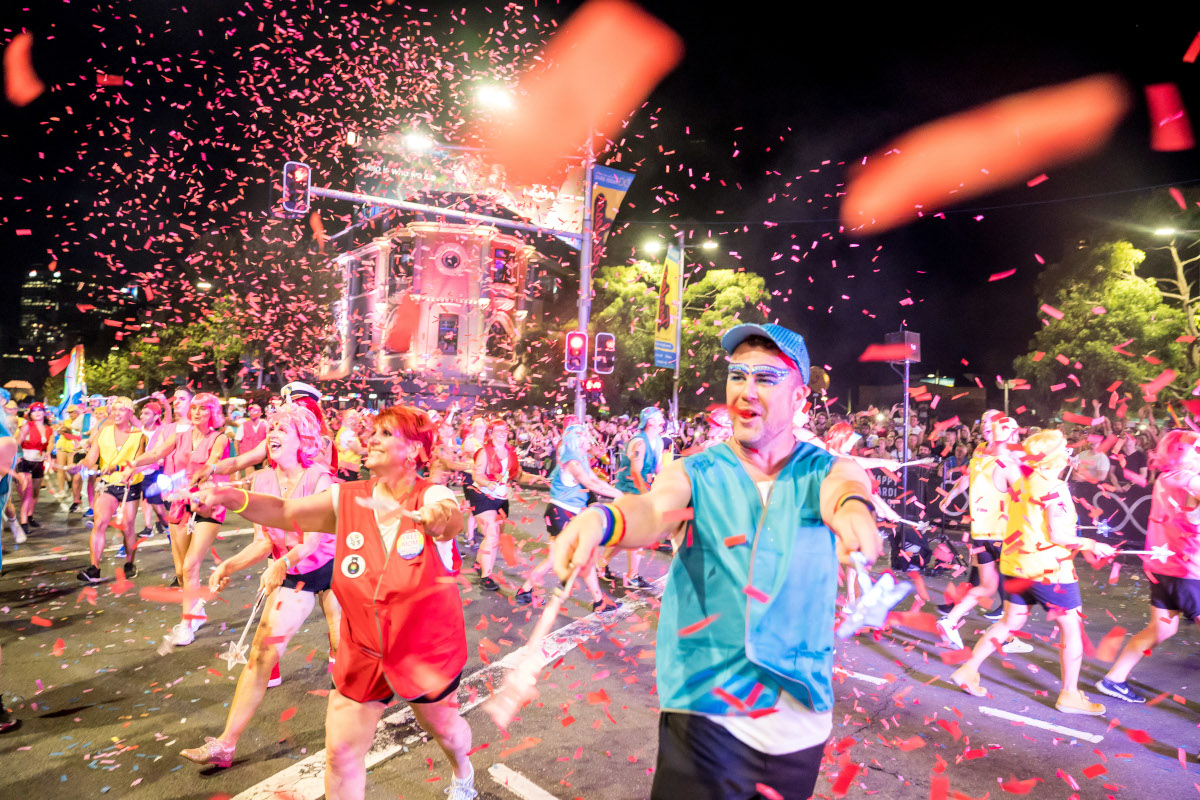 The birth of the Free Gay and Happy float is a beautiful story of true love and acceptance. In 2005, Michael Gardiner was considering suicide because he couldn’t accept being gay. His then-wife Teresa decided to take him to Mardi Gras to show him how amazing the LGBTQI community is. Then, the following year they entered the parade under the name “Free Gay and Happy”, and they’ve been doing it ever since. This year, Free Gay and Happy is celebrating YOU in a typical Dr. Seuss way… ‘Today you are you, that is truer than true. There is no one alive who is you-er than you!’

16. NSW Rural Fire Service – One Team, Many Players, One Purpose

The NSW Rural Fire Service deserve plenty of applause after the current unprecedented bushfire season. But fighting fires is one part of their responsibilities. “In addition to firefighting and community protection,” they say, “our 73,223 strong volunteer workforce is also responsible for structure fires in over 1200 villages and supports other agencies in emergency situations including accidents, flood and storm, and search and rescue situations.” The NSW RFS Volunteers come from all walks of life with a focus on community and diversity. Give these guys a round of applause! Poof Doof is a gay rave nightclub in Melbourne that has expanded its quintessential queerness into Sydney by hosting dance parties at ivy on George Street. Planet Poof Doof: Beyond Stardust is an inter-gay-lactic expedition along Oxford Street, grooving to the greatest dance music this millennium has to offer. According to Poof Doof, “whether it’s trans rights, the religious discrimination bill or anti-nightlife legislation, it’s important for our community to look to the stars and advocate for the safety, acceptance and happiness of current and future generations of LGBTQI people.”

55. Kathy Sant and Jenny Mann – Attack of the Redneck Spiders!

Kath and Jen are a typical lesbian couple who make Mardi Gras floats in their kitchen. Their love for b-grade horror movies will make its mark for this year’s Mardi Gras Parade. According to Kath and Jen, “Attack of the Redneck Spiders! depicts Scott Morrison as a giant redneck spider whose b-grade government is attacking all we hold dear. These relics of another age have already swallowed Safe Schools. Now workplaces won’t be safe for queer people. These monsters will take schools, hospitals and aged care facilities if they can, even toilets if you’re trans or non-binary! Stop the horror show now!”

If there is one much-loved parade entrant that wows the crowd every year, it’s the lifesavers. Lifesavers With Pride work with Surf Life Saving Australia (SLSA) to create a more inclusive and progressive life-saving culture that embraces the LGBTIQ community. According to Lifesavers With Pride, “we also keep the beaches safe by ensuring that each and every surf club is a proud surf club and that they are safe places for all of us, where we can be ourselves without fear. The ocean doesn’t discriminate and neither should we.”

DIY Rainbow is a Sydney based community group that chalks rainbows for equality. This will be their eighth year in the parade and to celebrate they are honouring the trailblazing 1980s sitcom, The Golden Girls. According to DIY Rainbow, The Golden Girls consistently addressed LGBT issues where, at the time, there was little to no visibility of positive queer relationships on TV. Also, we love dressing up! Tonight we celebrate with a simple message – thank you for being a friend.” The Point Clare Families are a community of LGBTQI-friendly people who live near Gosford on the Central Coast. Their community includes same-sex parented, opposite-sex parented, foster parent and single-parent families. “Regardless of our family structures,” the community says, “we want to raise open minded, accepting and confident kids. Our kids identify as a range of genders and sexualities and are aged 5-15. To us, community matters.”

If you’re wondering about the name, here is the exact acronym: The Politically Inspired, Non-violent, Kind & Fabulous LGBTQI+ & Allies Marching In Notorious Group Of Satirists. Nothing else matters to these guys more than the capacity of the Earth to sustain life. Following the recent summer season, The P.I.N.K. F.L.A.M.I.N.G.O.S.’ aim is to highlight how we all are contributing to a warmer, more inhospitable environment in their own satirical way. “We hope that it will inspire into action our governments, businesses, communities, families and individuals to practically address this climate emergency, now.”

The parade will go live at 7:30pm in Sydney, broadcasting live via SBS TV at the same time of 7:30pm in Victoria, Tasmania and the ACT. Queensland is 6:30pm, South Australia is 7pm, and Northern Territory is 6pm. Western Australians can watch it live with the rest of the world via SBS On Demand, or wait until 7:30pm AWST to watch via TV.