It’s been a season of the crown. On film, it was donned by The Favourite’s Queen Anne – and in Mary Queen of Scots, both Queen Elizabeth and Queen Mary wore it. And now in Mary Stuart, Sydney Theatre Company’s (STC) latest offering, it is being worn again.

To have two interpretations of Mary Stuart’s story in one season is quite a treat.  If you’ve seen the film, be assured this is not a repeat as it focuses on Mary’s last days.  STC’s Mary Stuart is by far the superior product. It has a fine script (another triumph for Kate Mulvany, who adapted Frederick Schiller’s 1787 work), and under Lee Lewis’ director’s eye the two queens in this production have equal presence on the stage.

The play opens with Mary looking well past her prime, imprisoned, watched over by Paulet, her Puritan gaoler. By the time the play begins, she has spent 19 years in custody in England after fleeing there to escape plots against her in Scotland.

Catherine Brazier as Mary is perfectly cast. She has an elegance that gives her the gravitas and sex appeal to convey Mary’s nature as a seductress. Her bearing is a perfect contrast to the more bawdy Elizabeth (Helen Thomson) who is played at different times as Trumpian, Blackadderish and a little like the Favourite’s Queen Anne. The play does share a little of The Favourite’s irreverence but possibly stays closer to the facts.

As in Mary Queen of Scots, this play references a meeting between Elizabeth and Mary, which historians assure us there was not. However, this contrivance is too delicious for playwrights and filmmakers to omit. In this case the situation is well done and does nothing to detract from the narrative.  As director Lewis says, “there is no classic way of telling the story of two women of power that has not been construed by men. But there is a chance in this adaptation to see a scene that has not lived on the Australian stage before the meeting of two queens as imagined by a young and powerful female Australian playwright”.

The play is clearly told from the women’s point of view. Firstly, both women are at a stage in their lives – Elizabeth is 51 and Mary is in her mid-40s – where they display an earned confidence. This confidence is much harder to portray when young without it being misinterpreted as arrogance or bravado.  Both are well past their prime in Elizabethan England but they know who they are, their rights, and their rightful place in life. These women have seen much – Mary has been mistreated by two husbands, married men only interested in her crown, treacherously treated by turncoats in her own Scotland, and despises the “thick-legged and lewd turncoat Scots”. Elizabeth, too, has been betrayed by a sister, abandoned by her father, experienced a succession of stepmothers after her own mother was beheaded, and reportedly raped by one of her guardians. Both women had been called whores. Elizabeth had made a decision to be a self-proclaimed virgin to protect herself and her crown from men – men who wanted nothing more from her than her power and crown. 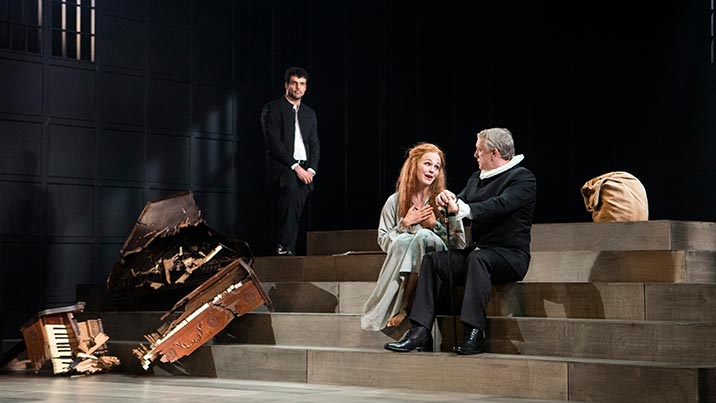 Elizabeth has created her own style in the way she rules, makes decisions, and empowers her men. But at heart she is a woman with the loneliness similar to all women in positions where their gender is heavily outnumbered.

The scene where Mary and Elizabeth meet is sensitively done; they are just women. They begin by sharing their similarities, enjoying each other’s company, but ending with the fury of women scorned. The staging is stark but impressive, and also worth acknowledging are the rich costumes and spectacle they create.

Peter Carroll has another scene-stealing role as Shrewsbury and not just when he’s covered in pigs’ blood. Mortimer (Fayssal Bazzi) is a character created by Schiller in his original play to free Mary. His character in this play serves to illustrate the support of Mary and the devotion she still commands from her prison cell. Leicester (Andrew McFarlane) is simpering in his devotion to his Bess – it is perhaps an overdone interpretation but it must be remembered that, like Mary Queen of Scots, this is another chapter of the story from the women’s point of view.Kate Mulvany has become one of Australia’s most adept adaptors of material for the stage, and with Mary Stuart she has triumphed again. Mulvany writes with wit – there are several easy laughs and the script cleverly embeds the feminist theme without belabouring the point.

The play is two hours without an interval but the action moves swiftly and the time passes easily. Mary Stuart is well written, well staged, and well acted. It’s a great start to STC’s 2019 season.