A movie that should’ve stayed a painting.

Sitting through The Nun like a half-baked high-schooler trying to will something into existence on his blank essay paper, I regularly referred to the constant stream of comments and exclamations a few seats behind me. This way, I could gauge an audience response to the newest addition to the Conjuring/Insidious/Annabelle etc. universe. The five or so teenagers up the back, the only other people in Hoyts’s cavernous IMAX theatre for this slapdash con job disguised as a horror movie, had the right idea for enjoying it. They talked about entirely unrelated matters all the way through the movie’s swathes of boring exposition, only to yell advisory comments to the braindead characters and whoop and cheer at the jump scares.

The Nun is execrable stuff, really awful and pointless, but it arguably does exactly what it sets out to do, packing theatres with teens looking to fill the void between Marvel instalments. It also expands the franchise’s cinematic universe, so nobody questions why we’re getting a movie that’s essentially about a painting hanging on the wall in The Conjuring 2 (2016). 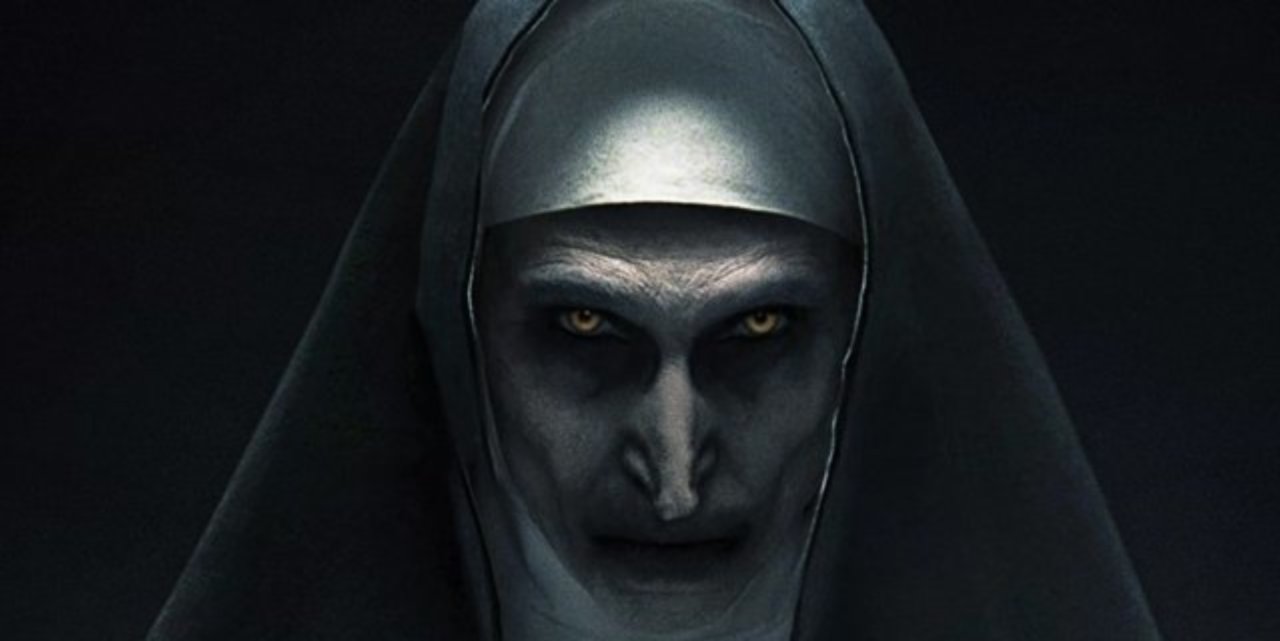 To be fair, that painting, of a shadowy Nun with bright pinpoints for eyes, became the scariest moment in the Conjuring’s plodding sequel. It offered a subtle, eerie moment for director James Wan to create tension before inevitably ratcheting everything up a few thousand notches, shaking walls, throwing things out of windows and turning countless crosses upside down. So, naturally, the spinoff saturates us with the Nun, turning her into a fish-mouthed Speedy Gonzales wreaking havoc in an old, abandoned church.

The film stars Taissa Farmiga, hip and alluring in the American Horror Story series, here on autopilot with a blank stare and wide eyes as the nun-in-training Sister Irene. She’s chosen by the Vatican to investigate a suicide in Romania, even though, she tells us, she doesn’t know why.

If Sister Irene was supposed to have a character arc, it must’ve ended up on the cutting room floor. At the beginning she’s introduced infecting children with scepticism about the bible, telling them dinosaurs probably existed and to not take the bible literally (oh, the heresy!), and by the end of the film she’s taken her full vows and placed her faith entirely in God. She goes from doing something she was going to do anyway, to having done that thing. That’s not an arc. That’s a straight bloody line. Set in the 1950s, Sister Irene and Father Burke (Demián Bichir) show up in primitive Romania, where they travel by horse and cart and everyone behaves as if it were pioneer times. These scenes, where swooping takes reveal glimpses of the town, the looming church and the decayed graveyards, are far more memorable than the milquetoast scares to come. Gina Calin’s set design is meticulously detailed, a set you’d like to take a tour in, while Jennifer Spence as the production designer assures a sense of isolation in the remote community—you forget there’s a bustling, industrialised world outside.

One wonders what these professionals were doing mixed up with a bunch of amateurs like director Corin Hardy and screenwriter Gary Dauberman. Hardy directs the shocks like a true hack, knowing that if he quiets everything down for a few seconds, the obligatory roar and orchestral clang will at least get jolt out of a few audience members. The teenagers in back of my cinema greeted every jump with a volley of curses, so I guess he fooled them.

Dauberman’s dialogue amounts to long-winded explanations that sap the tension established with the film’s details. In the graveyard outside the church where the evil Nun resides, every grave is fitted with a bell and a string leading down to the coffin. The detail is eerie, we know later in the movie they’ll start ringing, yet Dauberman still has the personality-non-grata Father Burke painstakingly give us a rundown of the purpose of these bells, despite the detail being clear enough. There’s a comic relief character, who willingly adopts the moniker ‘Frenchie’ (Jonas Bloquet), but he never says anything funny and doesn’t matter, so he’s hardly worth mentioning.

The Nun is everything you might expect and less, with some misplaced effort and professionalism put into the set design. The creature is either a CGI blur or an up-close embarrassment and the jumps are more irritable than alarming. Having said that, the teenagers in back, whose appalling cinema etiquette enriched my enjoyment of the film, had a lot more fun than I did. I guess every movie finds its audience—this one just doesn’t deserve to.