A film that reminds us that you can’t always champion the press.

If The Front Runner stands out at all, it’s because it unashamedly bashes journalists and attacks the press, reducing journalistic integrity to snooping in bushes and stirring up controversies about the personal lives of politicians. Reitman and his co-screenwriters Matt Bai and Jay Carson, (Bai wrote the book on which the movie is based) suggest that the way the press behaved towards Democratic candidate Gary Hart (Hugh Jackman), is emblematic of the downfall in American politics today and the public’s insatiable lust for gossip, whether relevant or not.

Recent movies about politics and the press have championed American news outlets to be moralistic pursuers of the truth for the American people, The Post (2018) and Spotlight (2016) for instance. But, The Front Runner reminds us that journalism is a practice in service of businesses, and sometimes, chasing the story at all costs simply means digging for dirt without looking back to see whose face you’re flinging it in. 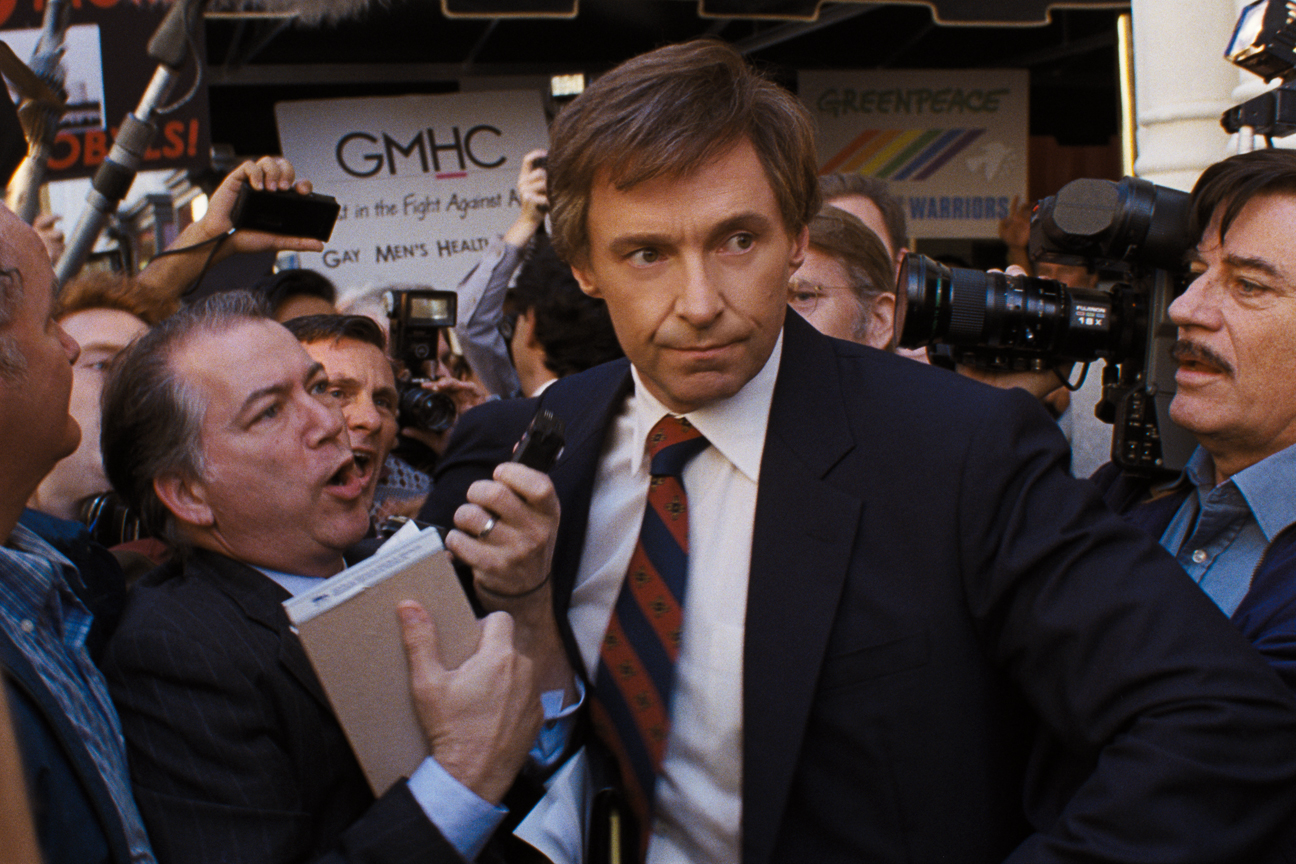 Reitman’s a Director I’ve admired for a long time. He combines genuine empathy with a sardonic, often bleak sense of humour in his writing and he directs as if the room is empty. His camera work is often hand-held and intimate—in movies like Tully (2018) and Juno (2008) it felt like he was the only one in the room with his performers.

Here, he mostly ditches the humour in favour of telling the story straight, but his ability to strip his actors of their superstar status is done beautifully. It opens like a Robert Altman movie, with the camera moving (shakily) around a news room and a political party board meeting while characters talk over each other. Watching it, you pick up casual, throw away details about the world you’re entering. You piece together what’s going on without exposition, just from overhearing. You see JK Simmons and Hugh Jackman and Vera Farmiga – but they don’t carry themselves like movie stars. There’s an averageness to them that the movie uses to its advantage.

Gary Hart was a presidential candidate and a favourite among the young, left-leaning voters. In 1988 he was the front runner for the democratic presidential nomination but he derailed his career after an extra-marital affair with Donna Rice (Sara Paxton). Something the Miami Herald newspaper dug up with an anonymous tip and a goofy stakeout. Jackman plays Hart well. Although he’s supposedly the cool candidate who speaks to the younger generations, Jackman maintains a stiffness in his performance that evokes a man who will not let go willingly of the respect he has worked hard to maintain. While the script throws in a few clunky lines about the young voters being the future of politics, Hart is still a complex figure, neither villain nor hero, whom you scrutinise rather than root for.

There’s a magnificent moment in the film when Gary first meets Donna, aboard the ludicrously named boat, ‘Monkey Business’. Reitman shoots this from far away, the camera bobbing with the boat’s movements. Eric Steelberg’s cinematography is grainy – an exaggerated 80s filmstock look that works in the movie’s favour. Gary is visibly uncomfortable meeting supermodels and straining to hear the conversation, until Donna sits down in front of him. He relaxes and smiles; the wide smile of a man who has already decided on how he will get what he wants, and escorts Donna to the top of the boat. It’s a simple moment and a perfect sort of synergy between director and actor.

The movie falters in handling Gary’s marriage to Lee (Vera Farmiga), trying to elevate the drama so that it matches the swarms of journalists closing in on Hart and the heated fights he has with his campaign manager, Bill Dixon (J.K. Simmons). There’s never a sense that Gary’s affair matters to his family as much as it does to his campaign. If the movie played this by blaming Gary’s narcissism, it would work. Instead, Reitman and co. dig for drama wherever they can, and the movie suffers for it. Thankfully, Farmiga is such a formidable talent that she takes the thinly drawn character and fills it with a life the screenplay can’t. Watch her carefully when Gary first admits of his affair over the phone to her. So much plays across Farmiga’s face in that moment, you see how she feels about him, what she fears will happen and how she’s going to handle it. I have no idea how Farmiga can do that.

It’s clear the movie sides with Gary on the issue. There are a few hammy moments that dutifully addresses the issue of Gary’s position of power and Donna’s desire to work on the campaign, but these feel shoved in to comment on contemporary revelations rather than genuine concerns. The fact that sides with a man who is flirting with, being the villain of his own story is what makes The Front Runner so compelling.