Any weekend that starts with the timeless poetry of Smash-Mouth is bound to be a good one. With so much sport on the horizon, from the BBL final to the start of Super Rugby, this weekend is certain to be one jam-packed full of entertainment and excitement. There is, however, one event that trumps all this weekend. That’s why I’m doing things a little differently and shifting my entire weekend focus to just one sport. The stars will come out, the dunks will be fierce, celebs will flock to Charlotte NC, it’s time… for the NBA All-star weekend.

There’s something about the NBA All-star weekend that makes it stick out above the rest. The NFL pro-bowl is an absolute farce, the NHL can’t generate the hype, the MLB (while a decent weekend) just doesn’t have the star power – at the end of the day nothing really compares to the spectacle that is the NBA All-Star weekend. And what a weekend it’ll be.

It kicks off with the rising stars USA v World game on the Friday night (Saturday here in Aus), followed the next day by the skills challenge, 3pt contest, and – of course – the slam-dunk competition. The weekend wraps up with the All-star game, a battle of the best between Team Lebron and Team Giannis. This weekend we are in for an absolute treat. I’ll do my best to provide tips – but take them with a grain of salt – this weekend is infamously hard to predict.

Image Via The Shadow League

America just loves to show off.

This battle for the future of the NBA will be a hard-fought match that pits the US against the rest of the world.
One of the best things about the NBA is its global appeal. With 108 international players from 42 countries, everyone has a local hero they can vouch for in the league. Australia’s Ben Simmons (last year’s ROY) will be leading the pack for us – and supported by this year’s hot ROY favourite Slovenian Luka Doncic, and solid Finnish power forward Lauri Markkanen, Team World will bring a lot to the floor.

Looking to defend the honour of their nation against the force of Team World are the rising stars of the USA. Led by the incredible backcourt of Donovan Mitchell, De’Aaron Fox and Trae Young, supported by the solidity (and fierce blocking prowess) of Jarrett Allen, and with a bench that includes some of the better players in the league (Kuzma, Tatum), Team USA won’t roll over easily.

This is going to be a closely fought battle, and I think Team World can rise to the challenge. I think Team USA will likely get the W – but I wouldn’t put it past Team World to cause the upset, so I’ll take them on the line at +4.5

This day is going to be a lot of fun.

Kicking off at 12:00pm AEDT, the Skills challenge will start the day with a bang. Showcasing some of the hottest handles in the league, pitting them against each other in a shooting-passing test of agility, the skills-challenge is always action packed and fast paced. This is a tough one to pick, but my gut is telling me it’ll be one of this year’s star rookies that take it home – Trae young or Luka Doncic. Trae’s performances have been too inconsistent for me to pick him here, but if he’s hot on the day he’ll be hard to beat.

Following on from the skills challenge is the 3pt contest. This crop consists of the best shooters in the league (minus Joe Ingles, who was snubbed for the second year running). The obvious favourite here is Steph Curry (who will compete against his brother Seth for the first time this year) who, shooting at 44.4% beyond the arc this season, should take the contest with ease.

The night concludes with the flashiest event of the weekend – the slam dunk contest. After Donovan Mitchell and Victor Oladipo’s immense performances last year, people are excited to see what this year will offer. Dennis Smith Jr, Miles Bridges, and John Collins have all been insane in their posterizers this season and any one could take the cake. This one is really tricky to pick, because we really can’t tell the moves these guys will try to pull. I have to go with Bridges here. 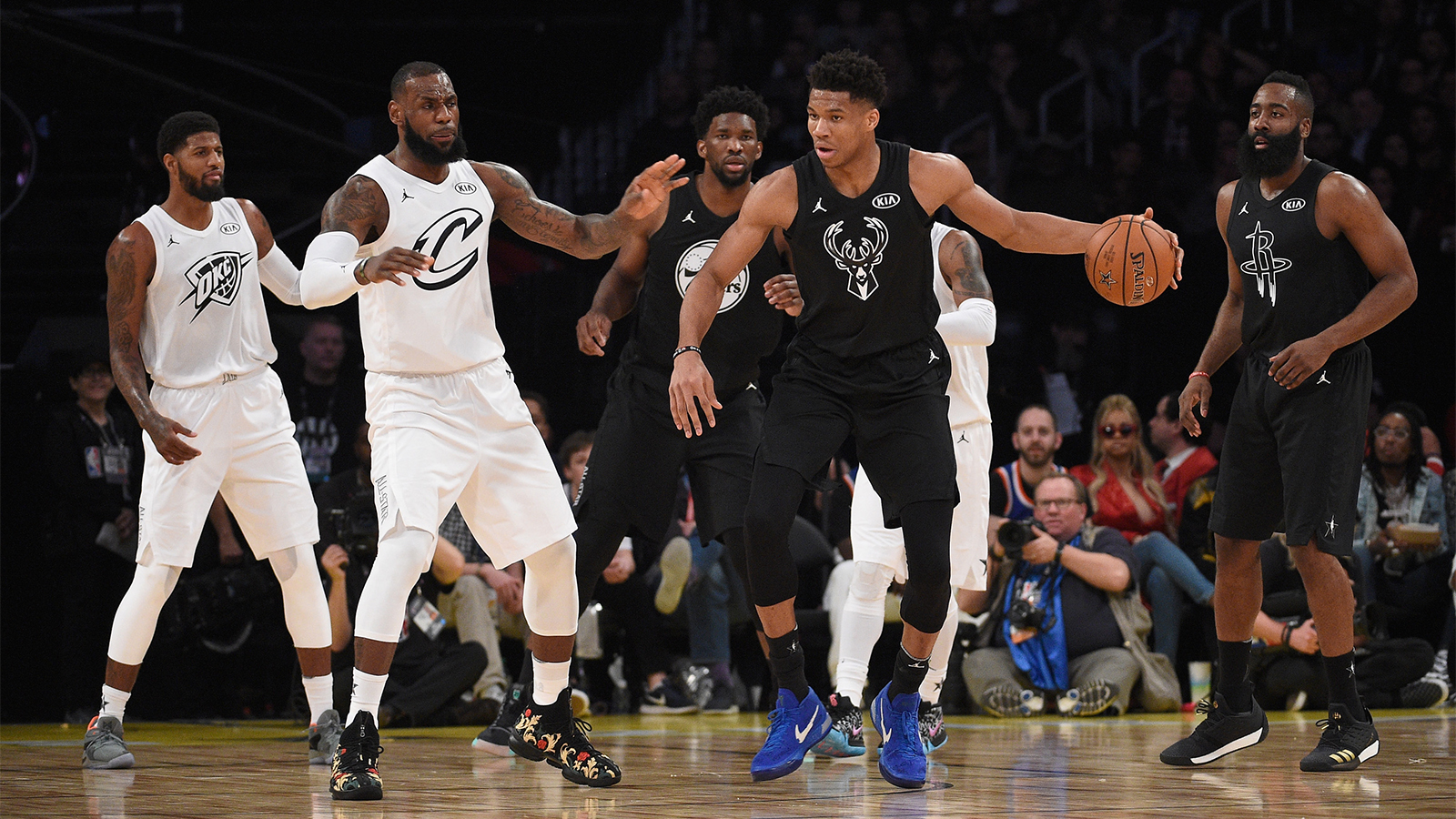 Finally, we reach the big show. The game that this weekend has been building up to. Giannis v Lebron, superstar v superstar, a court full of future hall-of-famers. This is going to be good.

Boasting a starting line-up with 4 MVP winners, Team Lebron is absolutely stacked with talent. From Curry, to Harden, to KD, to PG13, to Lebron “the king” himself, there isn’t a single player in this starting five that you can argue isn’t a bona fide super star. With Westbrook, Klay, and Lillard on the bench, the attacking prowess of this line-up will be impossibly strong. And, let’s be real, who isn’t looking forward to seeing Lebron and Dwayne Wade play together one last time?

On the other side of the coin is Team Giannis, led by the Greek-freak himself. The height and strength in this line-up is immense and supported by Kyrie and Kemba’s handles, this team will give Lebron’s side a run for their money. And you just know we’re keen to see Embid and Giannis together on what is sure to be a deadly pick and roll.

Team Lebron will be good, don’t get me wrong, but the bookies putting them as 6.5 point favourites is ridiculously inflated – it’s the all-star game, it’s going to be closer than that. MVP favourite Giannis Antetokounmpo will make sure of that.