The Hunter’s Week Ahead – 8 Apr

How great are sports?

Last weekend was one of the craziest weekends in recent sporting memory: we saw THREE NRL games decided by a field goal, the Bulldogs almost mounted another 30pt comeback in the AFL, and March Madness brought us so many close finishes I have no fingernails left to bite.

But, the weekend must end, and with it the positivity of every Aussie as they trudge back to work. Luckily, the Hunter’s here again to guide you through the week ahead and just make it that little bit easier with some of the sports highlights we can expect this week. 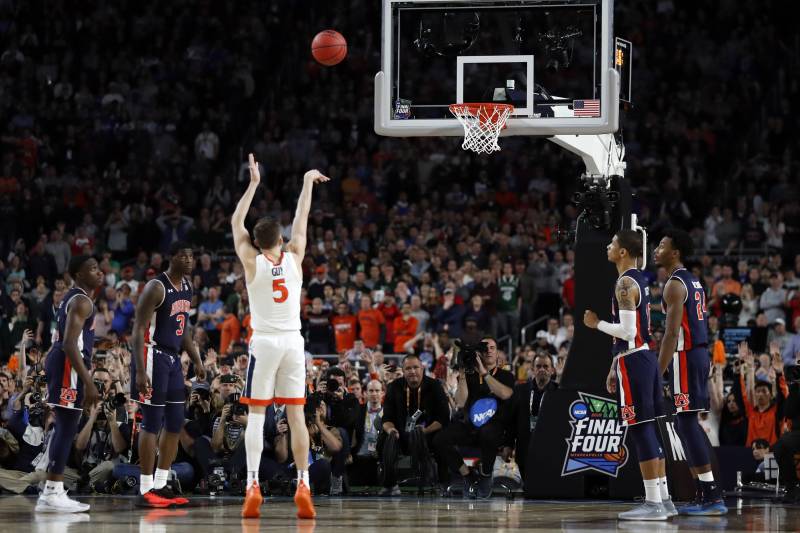 The past year (and especially the last month) of college basketball have all been building up to this epic climax to the NCAA tournament. These two teams have survived buzzer-beaters, top seeds, and teams that beat Zion bloody Williamson on their way to this game. Both schools are playing in the national final for the first time in their school’s history.

And what a final it’ll be.

The Virginia Cavaliers come into this game as clear favourites – but we all know that means nothing in March Madness. The Cavaliers actually know this better than most, being the first ever 1 seed to lose to a 16 seed when they were shocked by UMBC in the first round of last year’s tournament. It’s almost poetic that they now find themselves on the edge of redemption, facing a National Championship game just one year later. But, to be fair, they’re lucky to be here at all, winning their last game by one point after being fouled on a 3-pt shot with 1.5sec left – having won the game before in OT against Purdue. The path to the finals has been anything but easy for Virginia.

Texas Tech have actually been pretty awesome this tournament. No one expected them to be anything exceptional as a measly third seed, but they bulldozed both Michigan schools (2nd seeds) and Gonzaga (1st Seed) on their road to Minneapolis. Honestly, Texas haven’t looked shaky yet. But that could all change come Tuesday.

The great thing about March Madness is that every game is unpredictable.

But, because it’s my job to predict these kinds of things, I’ll give it my best shot. Texas have been superb this tournament, but the attitude and composure I’ve seen from Virginia has me leaning towards picking them. Plus, after their 2018 showing they definitely have something to prove. Now, for those of you who don’t closely follow baseball – or who lived under a rock this off season – Bryce Harper (arguably one of the best sluggers in league history – and inarguably owner of the best beard) made a multi-multi-multi-million dollar move to the Philadelphia Phillies in his free-agency. This brought with it a lot of drama, a lot of hurt Nats fans, and a lot of excited neutrals like myself, eager to see how the saga would play out.

At the time of writing this article, Bryce has been worth the money (all $330 Million – that’s not a typo), leading them to a 5-2 start by batting an insane .417 with 3 HR, 10 Hits, and 5 RBIs. A lot of which came from the 2-game series they already played against the Nats.

The Nationals have been less exciting so far. Losing their star has taken its toll, and honestly without the star-power of a pitcher like Scherzer, who knows where they’d be right now. Rendon has been pretty solid offensively, batting .444, but the weakness of the rest of the line-up means they’ve started the season 2-3. Already 2.5 games behind the conference-leading Mets (I’m as surprised as you are). They’ll need a bit of luck to win away against Philly, and I can’t see them taking it here. To say the AFL has been unpredictable thus far would be the understatement of the century. The $67 premiership roughie Brisbane Lions have run away to a 3-0 start, while the Melbourne Demons (arguably one of the best teams on paper) have once again failed to jump at the gates, going 0-3 to start the season. The Swannies have been hot and cold, and GWS have been about as predictable as an earthquake. With that being said, I’ve been watching closely for the first few rounds, and I think the matchup we have on Thursday will be one of the easiest to pick of the round.

At the start of the season, this would have been a game that many looked forward to – pitting two of the best teams in the competition against one another. Unfortunately, both have failed to live up to the hype with just one win between them in their collective six games so far. The Swans have been a bit of a curse for the Dees in recent years, having won their last seven straight against the Melbourne side. And honestly, I don’t see much changing here.

The Swans have had a patchy start to the season but put in a good show against Carlton on the weekend, showing some real promise for the weeks ahead. Melbourne, on the other hand, haven’t shown anything to inspire confidence from their fans. They’ve been pretty weak in their early performances, and are honestly playing like their season’s already over in week 3. Unless the Dee’s really pick up their game, I can’t see them getting past the swans.