Too much dumb, not enough fun

To explain why Skyscraper (dir. Rawson Marshall Thurber) doesn’t work, I have to resort to a scale: The more stupid a movie’s premise, the more fun that movie has to be. So, if you have an idea about a cop swapping faces with a criminal to arrest him, you’d better have two turned up performances from Nicolas Cage and John Travolta, plus a series of action sequences in which realism becomes a distant memory. Face/Off (1997) is wildly stupid, but you’ll be having too much fun to care. Similarly, if you have a brash, arrogant cop trying to stop a bus that can’t go below fifty miles per hour, throw in a villain played by Dennis Hopper and make sure the audience’s collective pulse slows for a only few seconds throughout the entire film. It’s a tricky balancing act masterfully handled in movies like Speed (1994), whereby the filmmakers ensure the audience is too dazzled by the action to question the script’s plausibility.

Skyscraper throws a former wrestler at an ablaze super-skyscraper while a team of criminals hunt down a MacGuffin-like USB drive owned by an eccentric architect-billionaire. Thurber and his team do almost nothing to counter the stupidity of the premise. Skyscraper drifts dangerously close to the 2012 (2009) zone in the scale: all dumb and no fun.

The movie unabashedly takes its cues from other epic actioners with a one-man-vs-the-world concept. Namely Die Hard (1988), with its protagonist proving himself against all odds to emerge from a  hostile situation a better man. It’s fine to plunder classic movies in the hopes of recapturing their successes, but Skyscraper does it poorly. Where Die Hard was a deceptively intelligent film about the development of John McClane from an arrogant, near-divorced bonehead to a man who sees what’s important in life, Skyscraper dials everything up a few thousand notches, hoping the audience won’t notice they’re watching an expensive con job.

Will Sawyer (Johnson) suffers a devastating injury near the beginning of the movie: A hostage situation goes awry and he loses his leg, so we next see him practicing Mandarin and clipping on his false leg before a job interview. Save for this physical injury, Will has no weaknesses. He has a perfectly bland family with wife Sarah (Neve Campbell) and two lovingly obedient kids. He’s about to sign up for a job as the super-skyscraper’s security analyst. Will isn’t a compelling character because, although he has things to lose, he has nothing to prove. What made Willis’s McClane so compelling was that he was a broken man in a bad situation. You feared for him because you knew he didn’t value his own life, so he really might not make it out alive. I’m sure there’s some director who could turn the man-mountain Dwayne Johnson into a fragile, broken character, but Thurber isn’t the man for the job—Skyscraper has no intentions of challenging the audience’s perception that Johnson is a man who can do anything and everything, even when he’s missing a leg.

A betrayal from a friend and an unexpected early return from the zoo traps Will’s family in the residential area of the Skyscraper, where a fire has broken out. The movie splinters off into a number of plots following Sarah and the kids trying to escape the fire by getting to the top of the building, Will trying to break into the building, an assassin (Hannah Quinlivan) hunting him down and the building’s architect discussing things in gruff tones with his cronies. This wouldn’t be needlessly complex if it were any fun. Unfortunately Thurber’s script can’t seem to settle on a villain, handing the responsibility first to Will’s friend, then to the seedy Mr Pierce (Noah Taylor), before throwing up its hands and letting faceless goons stand in for the villain. Without a counterpart to the protagonist, there’s nothing to tip the scales and create tension between the characters. The suave, vaguely European Hans Gruber was a perfect foil to the vulgar McClane, as was the psychotic Howard Payne was to do-gooder Jack Traven in Speed. Roles like those made you root for the villain as much as you did the hero, because they were so much fun to watch. Here, you obligingly hope Will grabs onto the edge of the building after his leap of faith simply because he’s the good guy. 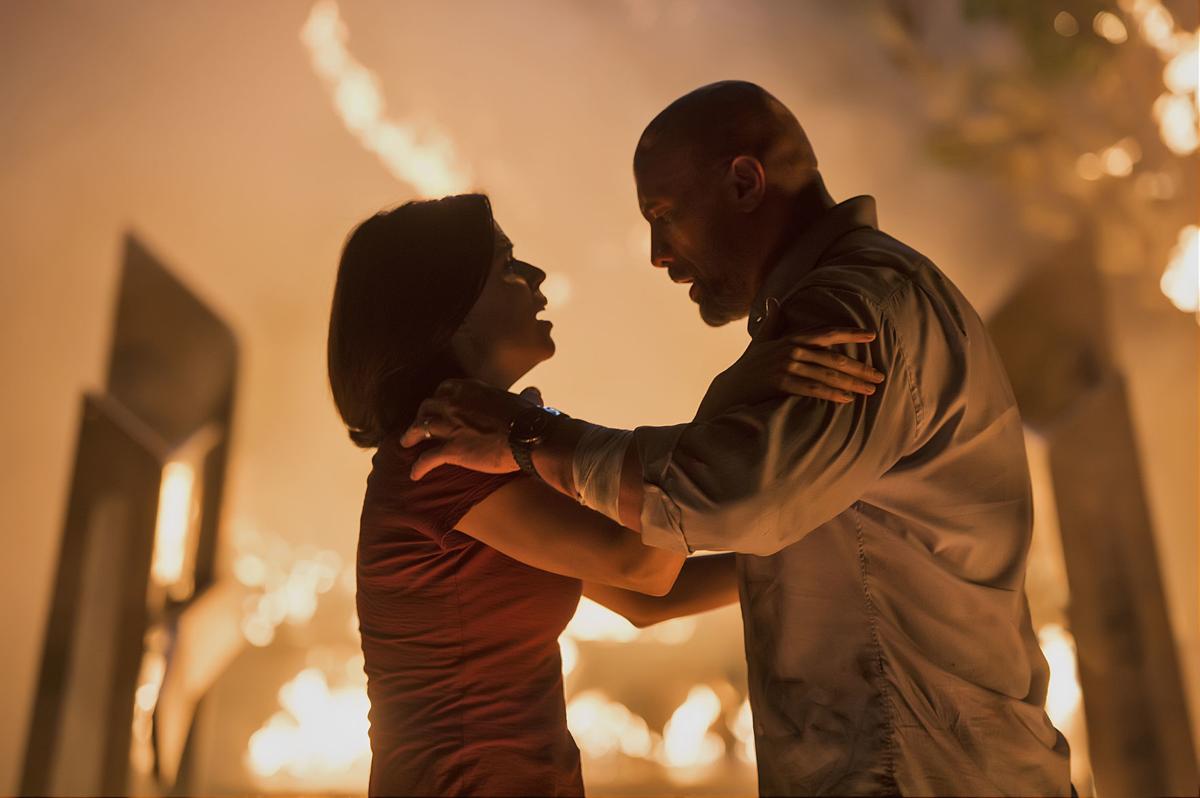 Skyscraper is mostly being passed off as a middling entry with a dedicated performance from Hollywood’s last action hero. To me, it hurts to see such a missed opportunity for big, dumb fun. I grew up protesting to my Dad that there was merit in stupid American action movies, convinced that there’s nothing quite like the thrill of wholeheartedly accepting the ludicrous Hollywood reality when you’re simply having too much fun to care.