Battle of the Sexes Film Review

Lovingly detailed recreation of an era.

There’s not much subtlety in a title like Battle of the Sexes. Calling their film something so loaded with political overtones, directors Valerie Faris (Little Miss Sunshine) and Jonathan Dayton, along with screenwriter Simon Beaufoy (Slumdog Millionaire) invite viewers to recognise that a competition between a man and a woman still has relevance today. And when that man is Bobby Riggs (Steve Carrell), a self-proclaimed ‘male chauvinist pig’ who’s making a mockery of something his opponent Billie Jean King (Emma Stone), takes seriously, it’s difficult not to make parallels between a certain ludicrous election overseas. It’s odd, then, that while the script certainly contains many on-the-nose lines about gender politics, Battle of the Sexes takes more of a middle-of-the-road approach to its competition, lending sympathy to both sides.

The ‘Battle of the Sexes’ was a 1973 tennis match, in which world number two Billie Jean King (bumped from number one after losing to Margaret Court, here played with icy reserve by Jessica McNamee) faced off against aging hustler and ex tennis pro Bobby Riggs. The film’s Bobby Riggs is a gambling addict who, in one of the film’s funnier scenes, proclaims to his gamblers anonymous group that they’re all in therapy simply because they’re bad at gambling. He wins a Cadillac he has to keep secret from his wife, he makes small bets with his son and he clearly hates not being top dog. The role is played with naturalness and ease by Steve Carrell, who reminds audiences he’s best suited as the arrogant dickhead you can feel sorry for. Carrell understands that Riggs’s chauvinism, while blatantly sexist and damaging to women’s liberation at the time, was mostly a selfish act. He blathers into the microphones at press conferences with the confidence of an internet troll embodied in human form, grinning in response to the cutting remarks from King.

Billie Jean King rejects Riggs’s proposition at first. She’s busy protesting the gross pay gap between women’s and men’s prize money in the major competitions, authorised by the Executive Director of the Association of Tennis Professionals Jack Kramer (Bill Pullman). I’d say King is Emma Stone’s best role to date, but how could I leave out Mia in La La Land, or the comically dorky Olive in Easy A, or her satirically melodramatic role in Birdman? Stone is a high-class actress, here wonderfully displaying Billie Jean King’s relaxed, winning smile, her reluctance towards fame and her sexual naivety. She soon hooks up with free spirit hairdresser Marilyn (Andrea Riseborough), an affair about which her husband Larry (Austin Stowell, who nails a role which is mostly mournful, knowing looks) is very forgiving.

Shot by Linus Sandgren (La La Land, Joy), the film is draped in a wonderfully period-appropriate sepia tone that evokes the hazy, free love-loving 70s. In fact, everyone involved does a marvellous job of recreating the decade. As a period piece, it’s top notch. Audiences might be affronted by the on-the-nose dialogue, featuring a radio DJ asking a group of women’s tennis players if they call themselves ‘women’s libbers’ and if the think their husbands will miss them, but as far as I can see, Beaufoy is right on the money. The event itself was ridiculous, and the way men in the media talked to and about prominent women is baffling. It ought to recall some of the things the current president of the US said during his election campaign; that whole thing was a bloody circus, and so was the 1973 ‘Battle of the Sexes’. In this way, the film feels topical, like the only recent movie to tackle the Trump/Hillary election head on, and it feels like a triumph that it does it so seamlessly. 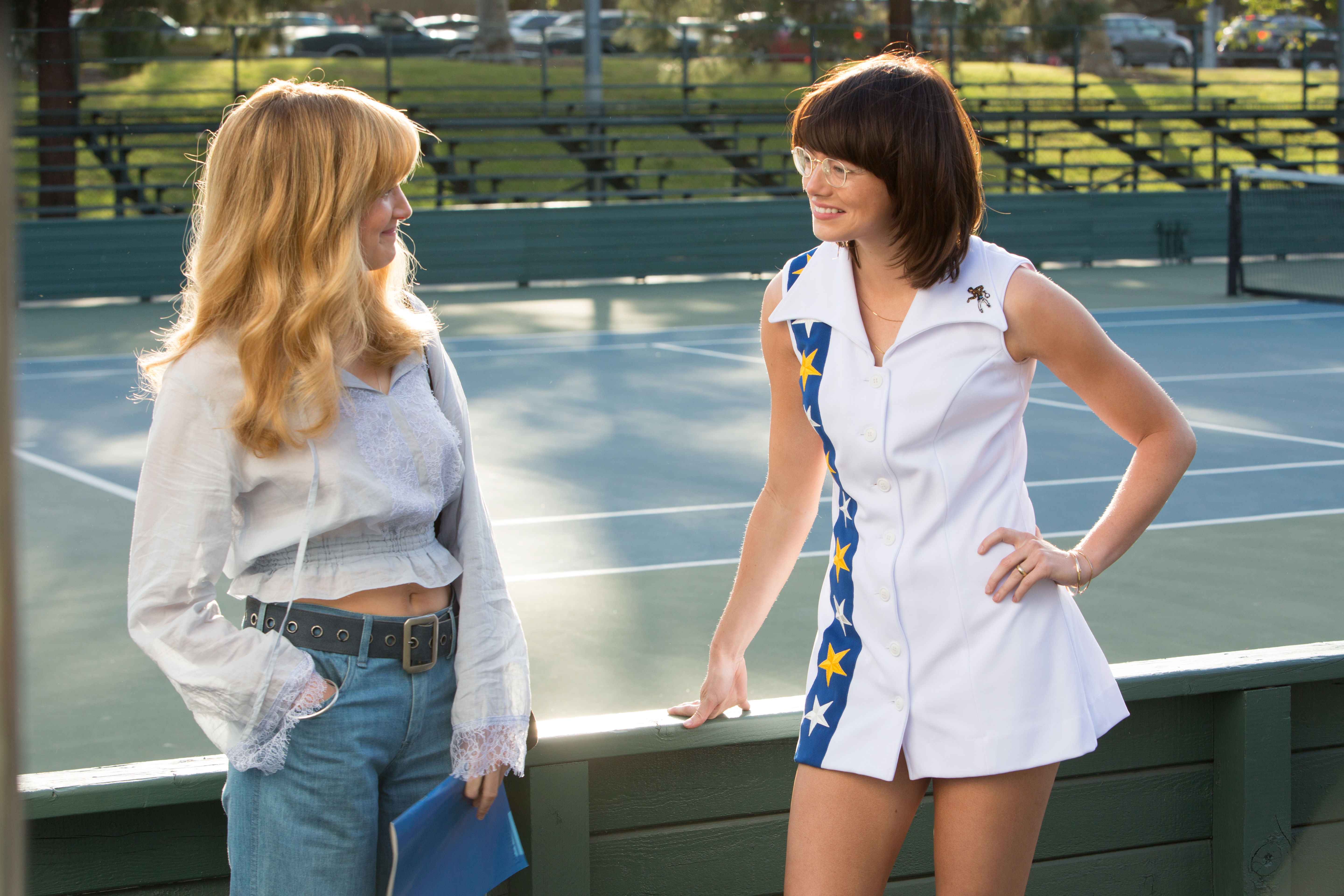 Where it falters though, and falters pretty crucially, is that it doesn’t seem to have the guts to commit to portraying Riggs as a clownish villain. He’s even given a peculiarly celebratory character arc in which he reunites with his wife. Billie Jean King is clearly the hero, but I wish the filmmakers had the guts to make the point that male chauvinism, even when it’s framed as a ‘joke’, is still misogyny. It’s still detrimental and poisonous to a culture’s ability to grow beyond embarrassingly primitive attitudes.

Finely crafted, entertaining and topical, Battle of the Sexes feels like a movie that’s worth your money. Its climax doesn’t match Olive Hoover’s (Abigail Breslin) epic dance at the end of Little Miss Sunshine, but it’s an excellent recreation of what we can now view as an important event in the history of gender politics. And, at least in this case, she won.