A poignant, moving tale of self-worth and redemption

“I want to restore what I have destroyed.”

This line becomes a refrain for Shoya Ishida (Miyu Irino), the protagonist in Naoko Yamada’s anime film A Silent Voice. Based on the manga series by Yoshitoki Oima and written for the screen by Reiko Yoshida, the film has an agenda, establishing itself as a modern moral tale about schoolyard bullying, self-worth and the prevalence of suicide among young people in Japanese culture. A description like that makes the film sound like a weighty, didactic melodrama, but just the opposite is true. Yamada directs Yoshida’s entertaining and funny script with a vibrant liveliness, bursting with light and colour and providing an uplifting perspective on serious issues.

Yamada’s first feature film (she previously worked at Kyoto Animation for 13 years) is the second widely successful anime feature in recent years, coming off the success of Makoto Shinkai’s highly regarded Your Name (2016).  It follows the redemption of Ishida beginning in primary school and finishing with his high school years. When Shoko Nishimiya (Saori Hayami) is introduced to the class, everyone perks up when they find out she’s deaf and has to communicate using a notebook. Ishida bullies Nishimiya relentlessly, resulting in some difficult to watch sequences where he yells in her ears, steals her hearing aids and throws dust in her face when she tries to be his friend.

Fast forward to high school and Ishida is withdrawn and suicidal. He has sold all his things, saved up a great deal of money and has a few more things to take care of first. One of them is to find Nishimiya at her high school and apologise. For Ishida, this brings new friendships and a life-changing journey concerning his own self-worth.

The voice acting in the film is top-notch. Hayami, an accomplished voice actress and singer, has the most demanding role as the hearing impaired Nishimiya and she embraces the physical aspects of her character’s voice and the poignancy of the character. Another stand out is Kenshô Ono as Ishida’s devoted friend Tomohiro Nagatsuka, a kind of comic relief character whose highly strung outbursts add levity to the dramatic plot.

The film conveys its themes in true anime fashion—through arrestingly beautiful visuals. Its settings and locations are conveyed in a kind of hyperreal sense, the sidewalks and urban environments real enough to graze your knees on. The sound mixing compliments the visuals perfectly, with the clattering of shoes through school hallways and shattering of glass rendered so intimately, you feel drawn entirely into the picture. The realism is countered by surrealistic flourishes. Big blue crosses obscure faces around Ishida to demonstrate his social withdrawal, giving viewers an imaginatively visual work of art that enhances its darker themes. It’s a perfect melding of visual style and thematic resonance. 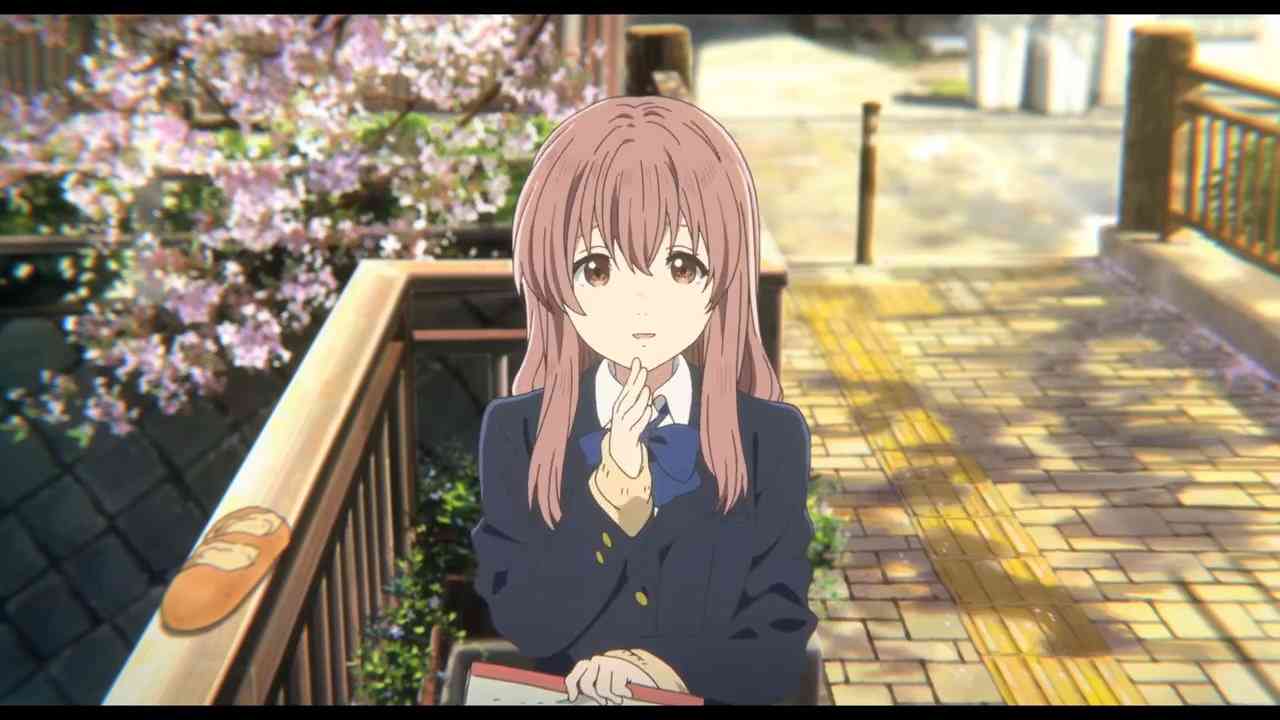 Ishida’s quest to restore what he has destroyed makes him a unique protagonist. In the beginning we detest him for the way he treats Nishimiya, yet his quest for redemption reverses our opinion: we eventually feel sympathy for him, yet he has only resentment for himself. It’s an important story told beautifully and without a dull moment, one which proudly wears upon its sleeve the moral message it wants to drive home.