It is no doubt that Sydney’s nightlife has changed dramatically over the century – even more since the 2014 lockouts. And it’s still changing.

Kings Cross is taking on a fresh face following the rise of apartment complexes. Newtown has made way for the influx of partygoers coming in from the outer suburbs. And Oxford Street, with help from the growing acceptance from the public towards LGBTIQ Australians, is gradually becoming redundant as a safe space.

From Kings Cross to King Street, Newtown, from drag queens to safe spaces, this is a snapshot of Sydney’s changing nightlife.

“With its gleaming new apartment towers, “hatted” restaurants, designer cafes and designer poodles, one would be hard pushed to find remnants of the Kings Cross of yore.” – Andrew Hornery, Sydney Morning Herald

It’s where it all started. Daniel Christie and Thomas Kelly became the victims of king-hit coward punches. Since then, the reputation of Kings Cross became a tainted red stain. Lockout laws were introduced, disrupting the usual hours of operation. And so the weak were weeded out. Bars and clubs closed for good while alternate commercial interests rushed in. It seemed like a dismal end.

But now, considering the journey, Kings Cross is reinventing itself. New ventures are setting up shop and longstanding ones are rethinking their stance.

“In the last few months there’s been a number of new places opening up, which has seen a reversal where people are now coming back to the area,” said Greg Turton, General Manager of The World Bar.

“It’s nice to have more entrepreneurs. It certainly won’t be the same as it was. It’ll be different.”

The World Bar stands as one of the few bars that held on through the sweeping lockout laws, and their way of surviving was creating new activities for the changing crowd.

In late 2015, The World Bar announced something different: The Blood Moon Theatre. This addition to the club gave it a unique standing against competitors, offering partygoers live production shows in a 70-seat theatre while keeping a classic clubbing atmosphere.

“There’s an element of diversification, especially from us,” Greg said. “We have really focused on a lot of live elements. There’s definitely a big push to get an increase in evening trade.”

And while those left are reestablishing their place, new ventures are coming into the mix. Restaurants like Bistro Rex and Nung Len have opened their doors, and new bars like Flamingo Lounge and Vivant Wines and Tapas have shifted the image of what was once considered a frantic late-night zoo.

Blake Coorey, the assistant vice manager of Vivant Wines and Tapas, said the dynamics of Kings Cross are changing.

“The area’s heading into more of a professional area,” Blake said. “People from Liverpool or Campbelltown would jump on a train to the city to come here, but that’s not what the Cross is about now.

“It’s now for local clientele and for people who are established in the area.”

“Since the lockouts back in February 2014, the area’s overall demographic has significantly altered the character of the area which is now needy of an upper-class late night venue,” Sidney said.

“We are extremely excited to have been the ones pioneering the area post lockouts.”

Flamingo Lounge has taken the place of the once famous Hugo’s Lounge, with Sidney assuring revellers that they’ve kept a lot of the original vibe.

“Our promise stands on impeccable hospitality in a fanciful atmosphere exuding boho luxe – an encompassing offering wishing to provide for the local community, the wealthy socialites of the Eastern Suburbs and Sydney’s after dark elites.” 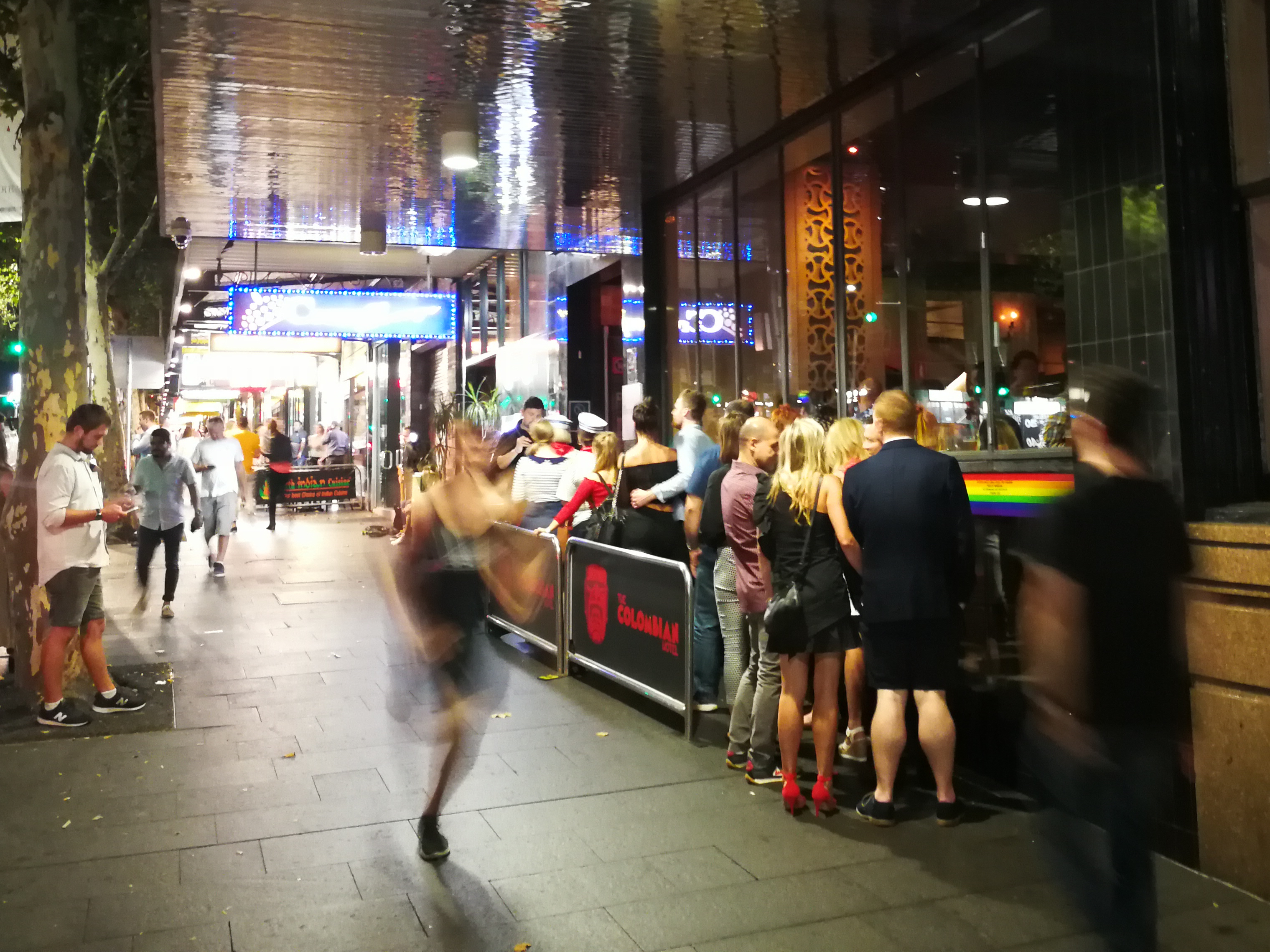 “It’s funny. We all sit around mindlessly slagging off that vile stink-hole of a city. But in its own strange way, it takes care of us. I don’t know if that ugly wall of suburbia’s been put there to stop them getting in or us getting out…. I can only fight because I’ve learnt to. Being a man one day and a woman the next isn’t an easy thing to do.” – Bernadette Bassenger, Priscilla: Queen of the Desert

Twenty years ago you wouldn’t have seen a drag queen step foot in Fairfield Bowling Club or Terrey Hills Tavern or Campbelltown RSL. Today, however, it’s become a visible norm – which for some was a necessity. Oxford Street is not like it used to be.

“It’s nice to have and it’s good to keep the culture alive, but if you look through the years, the more and more accepted we were the more and more [LGBT] venues closed down,” said professional drag queen Laydee KinMee.

“I guess that’s the way it works. If you hear people just five to ten years older than us, the amount of clubs were nearly double back then. Because it was the only place you could go to feel safe. But I can walk into my local RSL or a local pub – in drag or as myself – and I could feel fine. I don’t have to go all the way to the city to feel safe.”

You may remember Laydee Kinmee from Australia’s Got Talent in 2012. The Yodelling Drag Queen. If not, here’s her audition video:

For Oxford Street, Laydee doesn’t know whether it’s the lockout laws or cultural shifts, but people on Sydney’s iconic gay strip are not bar hopping like they used to.

“I remember when I used to go to the city, I’d go to three or four clubs, and I’d time it around the shows. And a lot of those shows would have been after lockout hours. Now it seems you pick one place and stay there – which I think is a bit boring. I think it’s good to jump from club to club.”

She also says the crowds have changed too, which has given her a reason to seek out the RSLs and bowling clubs of outer Sydney. Many within the realm of LGBTIQ do not live in the city while the mentality shared by straight people towards what was once seen as a taboo subject has changed into something curious and fun.

“Obviously not all gay people live in the hub, a lot of gay people live normal lives. They fly under the radar, they live in the burbs, they have the house, the yard, the dogs. They’re not living a high city life, so it gives those people somewhere to go.

“And straight people love us. They feel more comfortable seeing drag shows – I guess – in their own territory. Sometimes it might be a bit daunting going to a gay club when they’re a minority.

As for drag queens themselves, Laydee believes the future is all about capitalising on diversity.

“There’s lots of opportunities out there – if you think about what you wanna do, there’s a lot of avenues out there. It doesn’t have to be all about Oxford Street.”

“Getting to or from any of Sydney’s remaining locations where entertainment hasn’t been completely outlawed… is an increasingly difficult challenge as the hour grows later, while driving to Newtown is based on the optimistic premise that you’ll find somewhere to park your car.” – Andrew Street, Sydney Morning Herald

The delicate balance between making enough profit and keeping the drunkards at bay has steadily shifted in this bohemian inner-west jungle. Despite the growing health among many bars and restaurants, there’s a hint of anguish among some commercial outlets over Newtown’s changing visitors.

Dean Allan, manager and buyer at Better Read Than Dead, said that since 2014 they’ve shifted from their original eccentric tastes to mainstream titles due to the gentrification brought on by the lockout laws.

“People used to shop more at night before the laws were changed,” Dean said. “Now, on Friday and Saturday nights, Newtown is filled with drunk people, and the locals who use to shop with us then have now changed their spending patterns to an earlier time slot.”

“It has made us reconsider our store hours.”

On the flip side, bars and restaurants appear to be revelling in high numbers. Queues line the streets after midnight at many of the popular establishments.

The General Manager at the Bank Hotel next to Newtown station agrees there is a growing amount of revellers and partygoers tackling King Street and he insists the hipster vibe is yet to be extinguished.

“It’s very different from the CBD,” General Manager Dave Mill said. “We do have a lot of out-of-towners coming in, mixing with the community vibe on Sundays through to Fridays. Whereas Saturday attracts more of the out-of-towners.”

“There’s a diversity in Newtown.”

But what about the locals?

Cars beam their lights down King Street while revellers search for a party. Image: Christopher Kelly

“Weekends are becoming increasingly busy with clubgoers,” said local resident Lauren Mcloughlin. “The crowd seems to be getting younger too.”

“When I was 18  – eight or so years ago – Newtown was never an option for my friends and I. It was Kings Cross or Kings Cross if we wanted to go clubbing. Since the lockout laws, Sydneysiders have discovered Newtown’s quirky and energetic vibe.”

Lauren has been a local resident of Newtown for over a year and has resided there long enough to see the way the crowd behaves.

“You can stroll through the streets on a Wednesday evening and find alternative street dancers or musicians with a large crowd of locals having a dance,” Lauren said. “There are also so many bars or live gigs happening, that even on weeknights the streets are filled with couples and groups of friends.”

Another notable observation made by Lauren was that the crowd is not as seasonal as other locations “like the beaches”. She also notes there are no “huge” entry fees for most venues along King Street. The only downside, she said, is the queues that accumulate throughout the evening.

“Although many of my friends still attend the protests regarding the lockout laws, all of my closest friends now live in Newtown,” she said.

“I am one of about seven of my friends that decided to relocate to the area in the past two years. This is due to not only it’s central location, but also the fact that there is something to do every night of the week.”